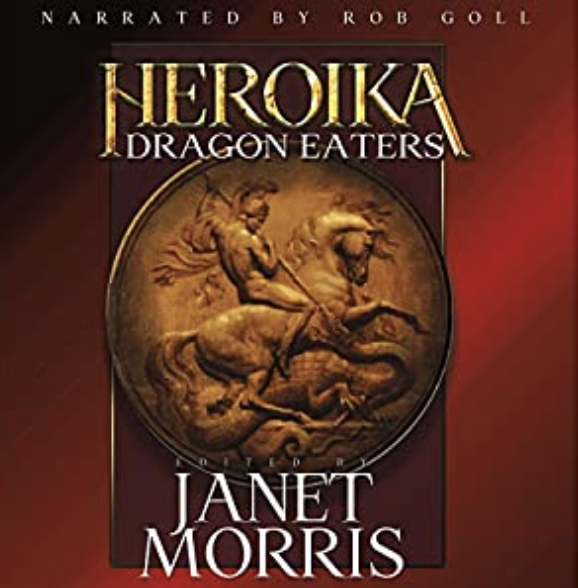 Very rarely an anthology comes along which has not one weak link, Heroika is that anthology. Seventeen stories by diverse writers in a multitude of genres with one theme in common: Dragon hunting! These are tales of the primordial power of the dragon and the heroes and heroines who face their fears to make their world safe. Here there is steampunk, historical, mythological and more. High quality writing which touches on the motivation, fear and grittiness of the Dragon Hunter (and Dragon Eater as some stories show the age-old maxim of gaining the enemy’s strength through eating them).

This audiobook is narrated and performed by Rob Goll who does an amazing job with the different accents, accents not just from different areas of the world and fantasy world, but accents from different historical periods as well. His classical theatrical talent lends itself toward perfect timing and the ability to effectively portray the emotions of the Dragon Hunters and in some cases the Dragons themselves.

It is hard to pick a favorite, I loved all of the stories in their own special way. If I had to pick it would be La Betaille by Beth W. Patterson. This is the story of a little Cajun girl, Pichou (yes, Mr. Goll does a wonderful, believable accent here), who stands up to her fear in the face of the threat to her world.

I highly recommend this compellingly written and narrated anthology. As J.R.R. Tolkien’s famous quote said: “So comes snow after fire, and even dragons have their endings.” Yes, they have their endings, but each story is a joy to experience.

Heroika was edited by Janet Morris